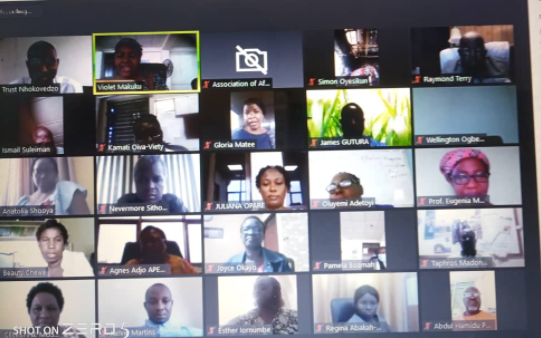 Dr. Violet Makuku, the Quality Assurance Specialist, Workshops Coordinator and facilitator of the workshop, encouraged participants to be vigilant and always be on the lookout for opportunities as there are many grant calls which are frequently released that a lot of stakeholders in African HEIs, including the workshop participants, do not get to know of.

Even in cases where they were aware of such calls and respond to them, some knowledge and skills gaps have led to their inability to win those grants.  This trend forms part of the background which informed the AAU to move to improve capacity in this area, with an ultimate target of helping more African Universities to actually win the grants when they submit their proposals in response to a specific call.

Taking participants through the sessions, Dr. Makuku highlighted that both Solicited and Unsolicited Proposals require high levels of dedication, knowledge, skills, time and hard work to win them. She explained that with Solicited Proposals, a taskforce need to devote quality time to search for them (via the internet and other sources).  The need to also subscribe to some channels/websites so that stakeholders are notified immediately there is a call for proposals was shared by her.

She also stressed the following key issues to consider when writing proposals and these include but are not limited to, having a policy in place, building good track records, adopting multi-disciplinary and inter-disciplinary approaches, teamwork and collaboration, monitoring and evaluation as well as effective communication.  Participants were encouraged to, “Build strong grant proposal writing teams which are so strong to an extent that no one will know who the leader of the team is.” She stated this when she spoke about teamwork and collaboration.

She explained that the Multidisciplinary and Interdisciplinary Approaches cover gaps and strengthen the case in a proposal. Citing an example of a research proposal on “Causes of increase in Malaria deaths in a given Community”,  she explained that if the writing of a proposal only include a team from the medical field, it will not help much, because other people  like religious leaders, communication personnel, Accountants, Demography Experts, Traditional Healers, Policy Makers, Environmentalists, Community Based Organizations (CBOs), Non-Governmental Organizations (NGOs) are key players, and therefore should be involved so that they work hand in hand to win the grant.

Several other examples were cited to drum home the message that multi and interdisciplinary approaches were strategic choices. One of such was the example of a proposal on, “The Cause of High Mortality Rate due to Malaria in a given Community.” She intimated that such a proposal would require among others, an environmentalist, to research on mosquito breeding places in that area and an editor to check and correct grammatical, typographical and other errors in the proposal.

Overall, she stressed on the need for hard work in the pursuit of grants and in the entire process of grant writing –  “It is only through hard work and dedication that we can deliver a strong economy and create opportunities for all”, she remarked.  Dr Makuku cited how in 2020, Prof. William Bazeyo, an academician in Uganda won a UGX 185 billion grant which benefited his country through the Makerere University and the Ministry of Health by determination and hard work, as an example. According to her, this was an unprecedented situation.

At the end of the session, Dr. Makuku highlighted the need to have sound knowledge and skills in academic writing and research methodology. She indicated that these are some of the workshops the AAU offers at international and institutional levels. She also urged institutions who are non- AAU members to register and become members to help take African Higher and Tertiary Education to the highest level.  Participants and stakeholders in general, were also encouraged to visit the AAU website (www.aau.org) and blog (blog.aau.org) for further information on the Association, and its various initiatives.