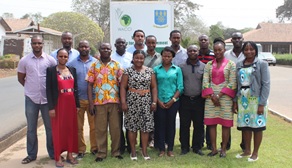 The Econet Foundation has awarded a USD 600,000 grant to the West Africa Centre for Crop Improvement (WACCI) for the training of 10 PhD students who recently enrolled in the flagship PhD programme in Plant Breeding at the University of Ghana. The students, who are from nine countries in West, East and Southern Africa, will be equipped with knowledge and skills in modern plant breeding to work towards transforming agriculture in their countries.

WACCI began as a 10-year project with initial funding from the Alliance for a Green revolution in Africa (AGRA) to admit seven cohorts of students to undertake the innovative four-year programme in plant breeding. To date, AGRA has fully funded the training of 53 PhD students, in addition to providing core funding for running the Centre.

In order to sustain the programme beyond the AGRA-funded phase, WACCI competed for, and won, the World Bank Africa Centres of Excellence (ACE) grant of USD 8 million to develop WACCI into a sustainable Centre of Excellence. This called for maintaining PhD enrollment at a minimum of 15 students per cohort for the period 2014 to 2018. Through the generosity of the DAAD-Germany and other projects, WACCI enrolled 15 PhD students in 2015. In January 2016, WACCI enrolled 16 students through grants from the Econet Foundation and the DAAD.

This Econet Foundation grant was made possible following the visit of the Governing Board of AGRA to WACCI in April 2015, which left a positive impression with the Board Chair of AGRA, Mr. Strive Masiyiwa, CEO of Econet.

The Director of WACCI, Prof. Eric Yirenkyi Danquah stated: “I am excited about this development because Mr. Strive Masiyiwa is one of the most influential Africans of our times. It is a tremendous motivating force for us, to see him endorse the WACCI programme by funding it. Our plant breeders will be game-changers and history makers on the agricultural front in many countries in Africa and Mr. Masiyiwa’s dream for Africa – A food secure Africa- and my dream as well will become a reality in our lifetime.”

The West Africa Centre for Crop Improvement (WACCI) was established in 2007 as a partnership between the University of Ghana and Cornell University with initial funding from the Alliance for a Green Revolution in Africa (AGRA) to train plant breeders, at the PhD level, with expertise to improve the indigenous crops that feed the people of the sub-region. Since inception, the Centre has enrolled 98 PhD students from 15 African countries and graduated 28 students from three cohorts. The Centre has also attracted over USD 26 million from multiple donors for the training of the next generation of Plant Breeders for Africa.

Econet is a privately held diversified telecommunications group with operations and investments in Africa, Europe, South America, North America and the East Asia Pacific Rim, offering products and services in the core areas of mobile and fixed telephony services, broadband, internet, satellite and fibre optic networks. The company also has investments beyond the traditional telecoms sector, which include financial services, insurance, e-commerce, renewable energy, education, Coca-Cola bottling, hospitality and payment gateway solutions. The Econet Foundation is at the centre of Econet’s network of corporate social responsibility programmes. The Foundation makes social investments by funding projects, which support people from disadvantaged communities. Agricultural Development is one of six focal areas of the Econet Foundation.