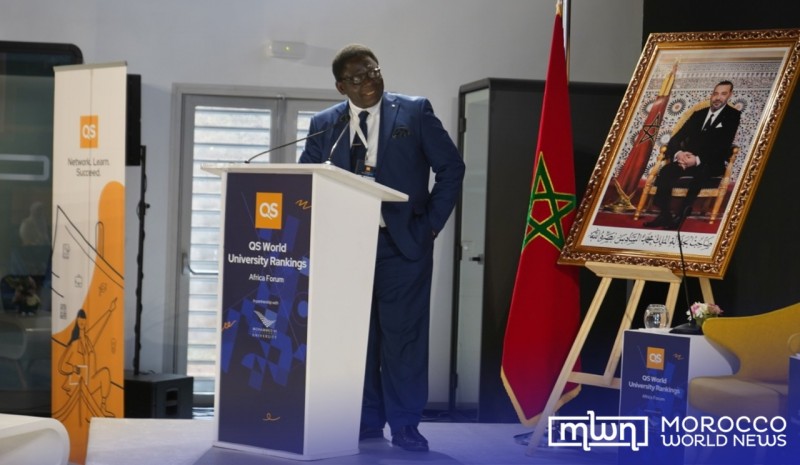 The Secretary General of the Association of African Universities (AAU), Prof. Olusola Bandele Oyewole, participated in the inaugural edition of the QS Africa Forum, held at the Rabat – Morocco’s Mohammed VI Polytechnic University (UM6P) in Morocco, from September 1-2, 2022.  The event was organized in partnership with Quacquarelli Symonds (QS), a British firm behind one of the world’s higher education ranking mechanisms.

The Forum created the platform for stakeholders to discuss solutions towards addressing the myriad of challenges facing higher education in Africa, the continent’s potential in the sector, and its achievements thus far.            While underscoring the many challenges confronting Africa’s higher education in its quest to advance knowledge and contribute to addressing the continent’s critical developmental needs,  speakers at the event exuded a sense of optimism for the future and a clear understanding of the steps and initiatives to take to reach the desired endgame – the Africa We Want.

Making a presentation at the forum in Morocco, Prof. Olusola Oyewole, the Secretary General of the Association of African Universities stressed the urgent need to redefine Africa’s higher education system, stating that Africa’s current education system remains fashioned or programmed after colonial legacies which is more teacher-centered, bringing about more downsides than benefits.

Prof. Oyewole put the spotlight on the current state of education in Africa – as regards the low percentage of global research undertaken by the continent,  the low uptake of research outputs, low skill and competence of learners, and little to no collaboration between universities and industries. He also spoke on the major challenges facing higher education in Africa which included funding, quality, relevance and employability of graduates, among others, while prescribing possible solutions to overcoming these hurdles .

Prof. Oyewole called for collaboration, networking, and inter-regional cooperation among universities in Africa which will in turn promote excellence, digitalization, lifelong learning, and the increase in access to education through distance education. He also spoke about some strategies to implement at the institutional and continental levels which include re-defining the curricula in African institutions to ensure it has a special focus on skills acquisition and entrepreneurship, promotion of industry-academia linkages, a renewed focus on research, and research focused on addressing local challenges, among others.

Focusing on the African Research, Innovation and Development Network (AfRID Network) anchored by the AAU and to be inaugurated soon, Prof. Oyewole mentioned that quality research is an essential tool for driving Africa’s development. According to him, for research to be relevant, it must lead to innovation and have scientific and societal value.