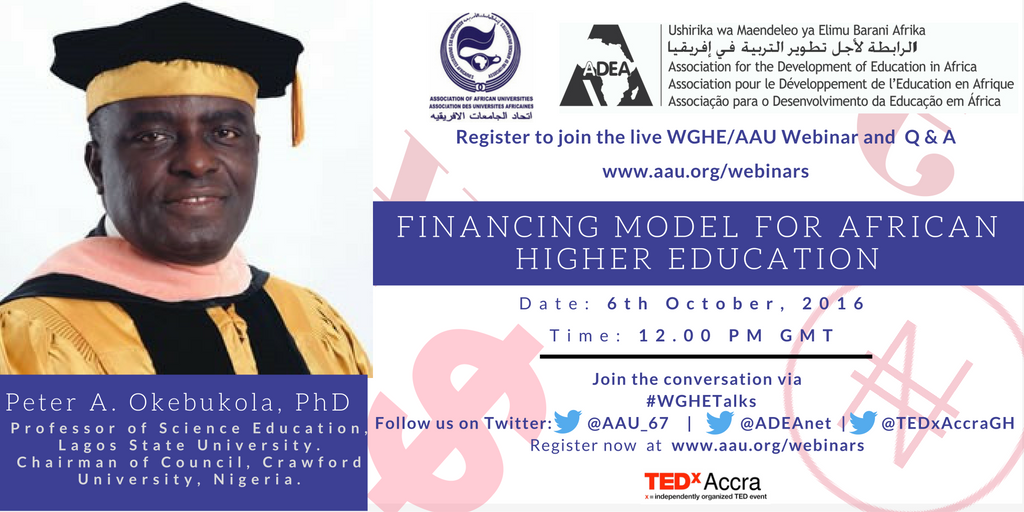 It is hard to controvert the importance of funding in bolstering the delivery of quality higher education in Africa (Okebukola, 2010; 2015).  Sadly, over the last ten years, there has been a dwindling in the availability of funds to run the operations of most African universities. The reaction of the higher education community to the depressed funding has been varied.  Some managers of the system resign to fate and deploy whatever funds that are available to run the university with a resultant lowering of quality. Yet some others are creative in funds mobilisation and are able to keep largely out of budget deficit. In the coming years, with an outlook for a bleak economy for many African countries, it is imperative to build capacity of higher education managers in rising to the challenge of fund inadequacy and for governments to recognise the importance of improved investment in public higher education.

Investment in public higher education has been justified on the grounds that university degrees benefit society by adding to the skills of the population and thereby improving the economy, increasing tax revenues, and in general adding to the “public good.” The more people who could attend universities and benefit from advanced study, the better. A university degree leads to higher income and greater civic participation. It is, without question, a good investment.  Because of the clear social benefits of higher education, society, it is argued, should invest in it. There is a pervasive agreement in many developing countries that government should provide most of the funding for public higher education. In many developed countries, however, that commitment eroded when conservative economists began to argue that the benefits accruing with higher education went to individuals, and were therefore a “private good” for which individuals and their families should pay. A concomitant of the private good idea is that grants have been changed to loans—placing major burdens on many university graduates. This ideological shift, combined with growing pressures on public budgets, is influencing a dramatic change in thinking about public higher education in some developing countries. A number of these countries have been slowly shifting the cost of public higher education from tax revenues to tuition paid by students.

In Western Europe, tuition remains low, or in some cases entirely free. This is a commitment to the public good argument. The European experience shows that modern post-industrial societies can support public higher education systems and provide access to growing numbers of students. In Australia, where there has been a U.S.-style shift to the private good idea, the funding system is based on a concept of a tax on the earnings of university graduates—degree holders pay back the cost of their higher education, over time, based on their incomes. There is less of an immediate burden on individuals and a greater degree of equity. In many African countries, the subscription is to the public good idea as the funding burden of public higher education is expected to be largely borne by government. However, governments in Africa are unable to carry this funding load and demand that university managers meet the deficit.

As reported by Newman and Duwiejua (2015), tertiary education in Ghana is funded through a variety of sources.  The main sources being grants from Government of Ghana, the Ghana Education Trust Fund (GETFund), development partners, internally generated funds by the institutions and contributions from students and private sector. GETFund deserves special mention because it has been the major source of funds for infrastructure development since its establishment. GETFund is a public trust set up by an Act of Parliament in 2000 to provide funding to supplement government efforts for the provision of educational infrastructure and facilities within the public sector from the pre-tertiary to the tertiary level.  The Fund is supported with contributions equivalent to “two-and-one-half percent or such percentage not being less than two-and-one-half percent of the Value Added Tax rate, as Parliament may determine out of the prevailing rate of the Value Added Tax”.   The money is paid by the Value Added Tax Service (now Ghana Revenue Authority) to the Fund through the Minister of Education.

Current models for fund allocation in Ghana are inadequate in several ways (Newman and Duwiejua (2015). The incremental and negotiated budgeting approach of funding of tertiary education institutions gives little room for serious planning in budgeting. This system of funding pays little or no attention to national priorities and the changes in the volume of activities performed by the institution.

In Kenya, there is a march to establishing the “Universities Fund” (to be managed by a buffer body called “The Universities Funding Board). It is a new funding model of higher education in Kenya that has been proposed under the Universities Act, 2012 and one of the key pillars of the post-2012 higher education reforms in the country. The reforms in the funding of university education was underpinned by the recognition that the financing for higher education in Kenya has been both inadequate and lacked effective coordination mechanism, especially in the face of competing demands for the limited national budget (Kiamba, 2015).

In Senegal, the performance contract funding model is being experimented (Toguebaye, 2015). It is a contract between the government and the public universities. In this contract, government undertakes to disburse a predetermined amount. In return, the institution undertakes to improve its performance in certain activity areas. By using this funding model, government hopes to encourage the universities to carry out necessary changes to make the higher education system in Senegal more effective and competitive. This is because it believes that, in spite of all the efforts made to fund them, the performance of the public universities does not meet its expectations.

The main objectives of the WGHE Webinar on Financing Model for Higher Education in Africa are to explore:

The expected outcomes of the webinar are:

The deliverables of the WGHE webinar are:

INFORMATION ON THE WEBINAR PRESENTATION

Peter A. Okebukola  is a professor of science and computer education at Lagos State University. He had his higher education at the University of Ibadan where he obtained his Bachelor’s degree in 1973 followed by Master’s and Ph.D degrees in Science Education in the same university. He had specialised science and technology training at the Massachusetts Institute of Technology (M.I.T.), and Harvard University, both in Cambridge, USA. He is a Fellow of the Science Association of Nigeria (SAN), Fellow and President of the Nigerian Association for Environmental Education and Fellow and past President of the Science Teachers Association of Nigeria (STAN). He is the President of GUNI-Africa. He won the prestigious 1992 UNESCO Prize for the Communication of Science. He has won several international gold medals in science and computer education.  He was concurrently the Chairman of Council of four Nigerian universities. He is currently the Chairman of Council of Crawford University, Chairman, Board of Trustees of Caleb University and Executive Chairman, Okebukola Science Foundation.  He has been awarded a number of honorary D.Sc degrees. He serves on a number of international organisations as Consultant including UNESCO, UNICEF, The World Bank, African Union, European Union and the UNDP. He is the immediate past Executive Secretary of the National Universities Commission (NUC). He is the recipient of the National Honour of the Officer of the Order of the Federal Republic- OFR. He is the current Chairman of the Advisory Council of the CHEA International Quality Group (CIQG). His current research interest is in funding models for African higher education.

Emergency Remote Teaching Webinars from 28 April to 8 May 2020