The United Nations Educational, Scientific and Cultural Organization (UNESCO), through its representation in Ghana, and the Association of African Universities (AAU) are seeking to enhance and broaden the long-standing relations between the two institutions, for the advancement of their respective goals and the development of Africa.

Among others, the UNESCO team briefed the AAU about the various initiatives it has been implementing to support African governments, including co-funding initiatives towards the achievement of the sustainable development Goal 4 – Quality Education, with the aim to advance quality, quantity and access to education. Identified challenges in the areas of quality assurance, as well as evaluation of learning outcomes to help build a solid basic education foundation for a smooth transition to Higher Education were discussed by the two teams.

On the AAU side, some of the Association’s efforts towards supporting lower levels of education were highlighted. This included the AAU’s involvement in The Demography of African Faculty Project, which aimed among others, to understudy the impact of the current senior high school system on the Higher Education system in Ghana and to provide policy direction for policy formulation.

The implementation of initiatives to build the capacity of teachers/lecturers were also discussed by the teams, with each of them throwing more light on their current strategies. UNESCO for instance, referenced working through UNESCO specialised institutes, with mention of its ties with institutions such as the Institute of Educational Planning and Administration (IEPA) and the African Institute for Mathematics, Science and Technology (AIMs) in Ghana.  The Association of African Universities also highlighted that its capacity building interventions continue to engage more lecturers, administrative staff and other general stakeholders in the African Higher Education sector. Between July 2020 and June 2021 for instance, a total of 40, 1663 participants were recorded to have participated in the various thematic capacity building workshops and interventions implemented by the AAU. This is a huge increment from the previous year where the number of stakeholders recorded to have been trained was 1, 156.  AAU endeavours to continue adopting various strategies, including partnerships with key institutions, to ensure more higher education stakeholders benefit from its capacity building interventions.

Some identified areas of collaboration and way forward

Detailing a roadmap regarding how the two institutions can work synergistically towards their mutual benefits, UNESCO invited the AAU to partner its upcoming conferences by hosting side events to showcase the AAU’s programmes and impacts to stakeholders. The AAU Television Station (AAU TV) was also identified as an instrumental platform to be used in projecting the African History, Culture and language, since this is a key focus of UNESCO. The promotion of the UNESCO convention was also underscored.

The team again recognised the need to engage stakeholders and support the various key institutions, including the Ghana Book Development Council in relation to the digitalization of the Encyclopedia Africana, which is yet to be digitized long after the Encyclopedia Britannica is online.  Continuous collaboration with key stakeholders in the private sector and industry was also prioritised as a way forward by the AAU and the UNESCO.

The AAU’s long-standing relationship with the UNESCO

The Association of African Universities’ relationship with UNESCO dates back as far as 1962, when consultative meetings towards the establishment of the AAU were held with executive heads of African Universities at a UNESCO conference on higher education in Africa, hosted at Antananarivo, Madagascar, in 1962. This formed part of a number of meetings and conferences hosted in different locations, including Sudan, before the final establishment of the AAU at a conference in Rabat Morocco in 1967.

Aside UNESCO’s involvement in the history of the AAU, the UNESCO and the AAU have continued to collaborate around key programmes and activities – including very recently (24 January 2022) partnering (together with other institutions) to host the 2022 Colloquium which marked the World Day for African and Afro-descendant Culture. The AAU contributed towards shaping the discussions on related curriculum issues at this event. 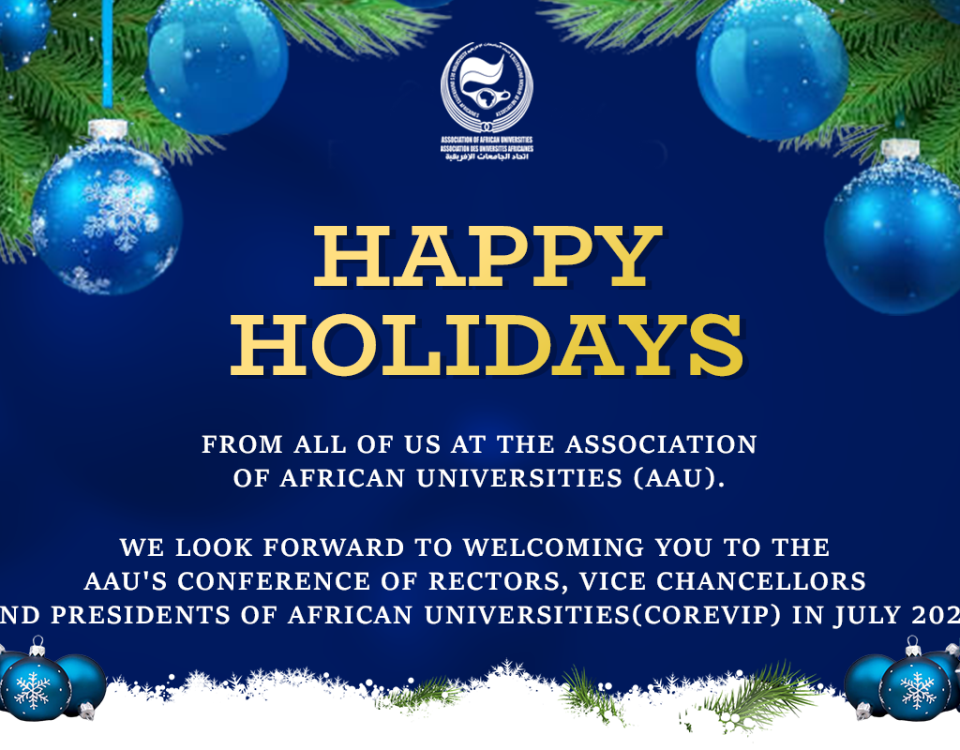 AAU In 2022 – Thanking all Stakeholders for your Continued Support